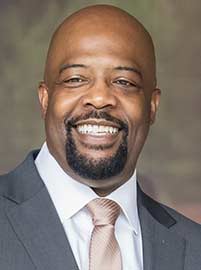 Rev. Frederick L. Smith was born in Orangeburg, SC. He is the son of Mr. Earvin Smith, and Ms. Pearl Zimmerman Smith. He is the grandson of the late Rev. Paul Zimmerman. He has one brother, Earvin Ryan Smith. Rev. Smith attended public schools in Orangeburg, SC, and is a 1984 graduate of Orangeburg Wilkinson High School. Upon graduating from Orangeburg Wilkinson, he then attended South Carolina State University. In 1989, he joined the United States Navy where he served as a Hospital Corpsman for 4 years. In 2000, he returned to school and eventually received his Associate's Degree in Respiratory Care.

Rev. Smith is a member of Kappa Kappa Psi, National Honorary Band Fraternity, Inc., and also a member of The Most Worshipful Palmetto Grand Lodge, Free and Accepted Ancient Yorkrite Masons, in which he served as Grand Master for the state of South Carolina for 4 years. In the year 2007, Rev. Smith answered the Lord's call into the ministry, and after tarrying for 3 years, under the leadership and guidance of the Rev. Charles B. Jackson, Jr., at the New Laurel Street Missionary Baptist Church, on April 11, 2010, he was licensed to preach the gospel of Jesus Christ, and on August 13, 2011, he was officially ordained by the Gethsemane Association. Since his licensing and ordination, he has completed and graduated from the Brookland Bible Institute at the Brookland Baptist church under the instruction and teachings of the Rev. Dr. James E. Jamison. In October, 2014, Rev. Smith accepted the call to Pastor, and now serves as the proud and humble Pastor of the Bethlehem Baptist Church, Newberry, SC.

His ministry objective is for God alone to be glorified. Because of this, he longs to preach the gospel, apply God's word and love his people. He believes that he must do whatever is allowed by God to reach others with the gospel and to cultivate growth in them to maturity in Christ. He is a firm believer in Philippians 4:13, which says, "I can do all things through Christ who strengthens me."